Andrew Balducci, Who Turned a Market Into a Food Mecca, Dies at 92

Andrew Balducci, Who Turned a Market Into a Food Mecca, Dies at 92

It began a century ago as a rented pushcart in Greenpoint, Brooklyn, operated by Louis Balducci, an immigrant from southeastern Italy. But it began growing thanks to his son Andrew, who, on his return from World War II, persuaded his father to leave the pushcart behind and move across the East River to open a modest sidewalk greengrocery in Greenwich Village.

Soon Andy, as everyone called him, had even bigger ambitions for the business.

“I always thought the store should be a little more sophisticated,” he told The New York Times in 2000. “So I put up a sign, ‘Balducci Produce,’ not fruit and vegetable.”

His father was skeptical about the fancy phraseology, but Andy Balducci’s energy and diligence would transform an Italian immigrant’s humble mobile market into an epicurean mecca that would pioneer specialty-foods retailing in New York and dominate that business for decades.

Mr. Balducci died on March 22 at 92 in a hospital in Roslyn, N.Y., on Long Island. The cause was acute leukemia, his wife, Nina, said.

Balducci’s flagship store, across the street from the original, opened in 1972 at West Ninth Street and Avenue of the Americas in Manhattan. Word of mouth made it a destination of choice for gastronomes in an era when tracking down what today is standard fare, like Italian parsley, would have required a dragnet of the city’s greenmarkets.

Culinarians could find red chicory there, five different kinds of eggplant, direct imports of prosciutto di Parma, custom-grown broccoli rabe from Italy and, later, from California, pitahaya (a sweet pink fruit shaped like a mango) and trevigiano (a variety of radicchio) — to say nothing of arugula.

Balducci’s topped the Zagat Survey of New York City’s food specialty shops, and the celebrity butcher and broadcaster Merle Ellis exclaimed in The Chicago Tribune in 1989 that the store was “as close to heaven as this butcher is likely to get.” (The night meat manager was homonymously named Louis Porco.) 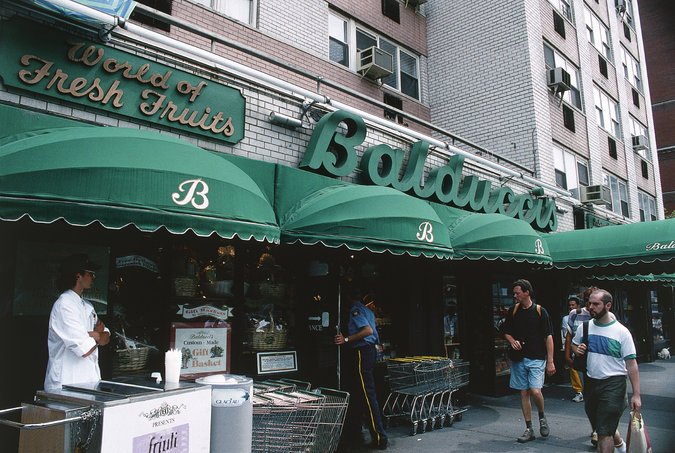 Balducci’s in Greenwich Village. A food writer said the store “was a place where, for the first time, New Yorkers found authentic Italian cooking.” Credit The Balducci family

“Andy and Nina really taught New York how to eat and cook genuine Italian food at a time when it was perceived as little more than pizza and pasta covered with red sauce and gooey cheese,” the food writer and cooking teacher Julia della Croce wrote in an email.

“Theirs,” she said, “was a place where for the first time, New Yorkers found authentic Italian cooking and could buy the ingredients they would need to make it at home.”

Andrew Balducci was born in Greenpoint on Aug. 3, 1925. His mother was the former Maria Miscioscia. His father, Louis Balducci, arrived from Bari, Italy, in 1914 and began selling fruits and vegetables from his pushcart two years later, earning $5 a week.

His parents returned to Italy with Andy when he was 2 months old, remaining there until 1939, when they went back to New York on the eve of World War II. Andy was 14.

He later took courses at the State Institute of Agriculture at Farmingdale on Long Island (now Farmingdale State College) and, not yet 20, enlisted in the Navy. He was injured during the Normandy invasion and hospitalized for six months.
After his discharge, he joined his father, who had lately been selling fish and delivering ice, in a new sidewalk fruit and vegetable stall at Greenwich Avenue and Christopher Street (with a bathtub out back for rinsing the produce as it was delivered). 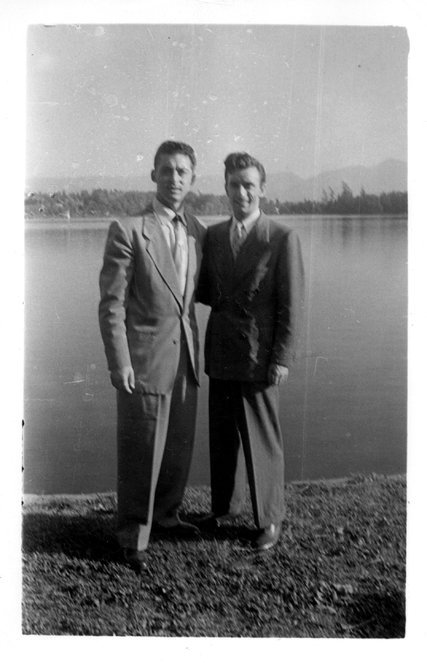 Andrew, right, and his brother, Charles Balducci, in an undated photograph. Friction between the two later developed over ownership claims. Charles died in 2015.  Credit The Balducci family

In 1952, the younger Mr. Balducci married the former Nina D’Amelio, who survives him, along with two of his four daughters, Marta and Andrea Balducci; his sister, Grace Doria; six grandchildren; and four great-grandchildren. His daughter Maria Murphy, who was known as Ria, died in 2006, and his daughter Dena Balducci died in a car accident in 1991.

Mr. Balducci took a hiatus from the food business in the mid-1950s to work for his father-in-law’s Long Island masonry contracting firm, in Great Neck. He returned to his father’s store in 1968. In 1972, when the rent was about to be quadrupled, they opened a 5,000-square-foot market across the street.

The kitchen was staffed by Andy Balducci’s sister and his mother, and his wife conceived a mail order catalog that soon thrived. Despite their booming business, though, the Balducci clan was as mismatched as bread and butter on an authentic Italian table.

Mr. Balducci and his wife, Nina, and a great-granddaughter. Credit The Balducci family

Rancor between Andy and the store’s co-owners — his sister, Grace, and her husband, Joe Doria — as well as between Andy and his father and his older brother, Charles, a physician who was known in the family as The Doctor, began boiling over in the late 1980s, leading to lawsuits.

Andy was accused by his father, by Charles and by the Dorias of cheating them out of their fair share of the ownership. When the Dorias opened their own market on the Upper East Side and called it Grace Balducci’s, Andy countersued over the use of the Balducci name. (That establishment became Grace’s Marketplace.)

The Guardian called all the acrimony “a grand opera of sibling rivalry, jealousy, alleged swindling and lawsuits more piquant than the spiciest olives on the deli counter.”

When his relatives accused Mr. Balducci of having a volatile temper, he told The Times in 2000, “I’m opinionated, but so far I haven’t killed anyone.”

By 1999, the real estate Balducci’s occupied was worth more than the business itself (which none of his daughters were keen to inherit), and so Mr. Balducci sold the store for $26.5 million. He and his wife retired to East Williston on Long Island and Paradise Island in the Bahamas.

The new owners closed the store in 2003 “after 54 years of selling perfect produce and overpriced provender,” The New Yorker wrote.

Another version of the store opened briefly a few blocks away as Balducci’s Food Lover’s Market, but it was shuttered in 2009 — although branches of it remained open in 10 locations outside New York, including Greenwich, Conn.
Today, Andy’s grandson T. J. Murphy is the chief executive of the family’s wholesale spinoff, Baldor Specialty Foods. (The name is a hybrid of Balducci and Doria.)

Despite the family feud, Louis Balducci gave his uncle due credit for the store’s success.
“Andy was the creative and driving force, but he also had an incredible team behind him,” he said in 2000. “In the ’70s and ’80s, you couldn’t touch Balducci’s.”