© 2006 - 2022 Maracaibo Media Group · All Rights Reserved.  Terms of Service  |  Powered by Cora+Krist.
Paying it Forward with a Swim Across Lake Michigan
Client Journal

Paying it Forward with a Swim Across Lake Michigan

There’s nothing like a son’s admiration and love for his mother. Just ask Nick Hobson who in honor of his mom, swam 20 miles across Lake Michigan to raise money for The Pink Fund, a Detroit based breast cancer charity that provides financial support to women while they go through treatment.

The swim marked 20 years since Hobson’s mom successfully beat her battle with cancer, but Hobson vividly remembers the toll it took on the family at the time. The image of his mom curled up on the couch crying is still vivid in his mind two decades later.

Grateful that she is a  survivor, and wishing to help others who are having trouble making ends meet while battling cancer, Hobson started a fund-raising page on the Pink Fund website, encouraging family, friends and online strangers who heard about his story, to contribute money to the cause. All the while, he began to prepare for his epic swim across Lake Michigan, from Holland to Grand Haven, a total of 20 miles. 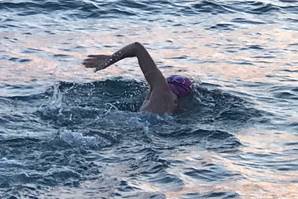 On Tuesday, September 4th, accompanied by a guide boat, Hobson entered the chilly lake waters at 6:30 a.m. from the shores of Holland State Park. 11 grueling hours later, having faced higher than usual lake chop, he completed his swim in Grand Haven, where his family, supporters and members of the news media were on hand to welcome him back to dry land.

We shared Hobson’s story with media across the region, many of whom interviewed him days prior to the swim – and then followed him to Grand Haven right to the finish. The media’s support helped Hobson raise more than he ever imagined – and the donations are still coming in.  These donations will help The Pink Fund provide assistance to families struggling with economic hardships they face while trying to beat a breast cancer diagnosis.

Witnessing The Power of PR