“Up To Speed,” one of this year’s Reel Rock 13 films, catches up with the sport’s top athletes—and fills us in on why Americans should know more about it.

When director Zachary Barr talks about people on social media criticizing or questioning Reel Rock’s inclusion of a new film about speed climbing in its latest film series, he just chuckles. Because he, too, was questioning not so long ago.

When the announcement came that climbing would be included in the 2020 games in Tokyo, “there was this brief moment of celebration in the climbing community, followed by collective befuddlement,” he says. That’s because the climbing competitors will be judged on three different categories: lead sport climbing, bouldering—and speed climbing, where two opponents climb identical side-by-side routes and try to beat each other to the top. Obviously, most elite climbers are super specialized, so asking athletes to shine in both lead climbing and bouldering seems like a huge ask as it is. But adding speed climbing into the mix seemed to be throwing in an even bigger wrench—because it’s not something most American climbers even think about, let alone excel at, Barr says. Blazing up a 15-meter artificial climbing wall on top rope in less than six seconds? It seems almost diametrically opposed to what most Western climbers think of as climbing.

“I spend all day long thinking about how to tell stories about climbing. I grew up climbing. And my phone is full of all sorts of people in the climbing world,” Barr says. “But I knew nothing about speed climbing. And I knew all these real climbers, cool climbers, who thought it was a joke.”

So Barr set out to discover what was behind this whole speed climbing thing—and made a film to bring viewers along. “Up To Speed” premieres this weekend at Reel Rock in Boulder, Colorado, and will tour with the other Reel Rock films throughout the year.

Turns out, speed climbing is a big deal in other parts of the world—and has been for decades. “Especially in Russia, this has been a major sport going back to the post-World War II era,” Barr explains. “The Russians, especially during the Soviet era, loved athletics. They love sport and really value competition and winning, and building an athletic infrastructure to win. For them, speed climbing made sense.” Basically, if you look at climbing purely as an athletic feat from that perspective, like any other sport, of course you’d be racing other people to the top, Barr says. It appeals the same way that playing video games or racquetball does: “People like to play their friends at stuff and beat them.”

In America it couldn’t be more different. “It’s a lifestyle, not a competition,” Barr says. “An individual pursuit of something greater.”

Instead of the slow, methodical problem solving and route finding that’s familiar to most American climbers, Barr says speed climbing is practicing the same route thousands of times until it becomes like a track event. The routes are standardized, so each competitor can practice on the same holds. They train their bodies like triple jumpers or long jumpers, Barr says, building giant leg muscles like a professional football player, so their bodies can explode from a standstill in a fraction of a second. 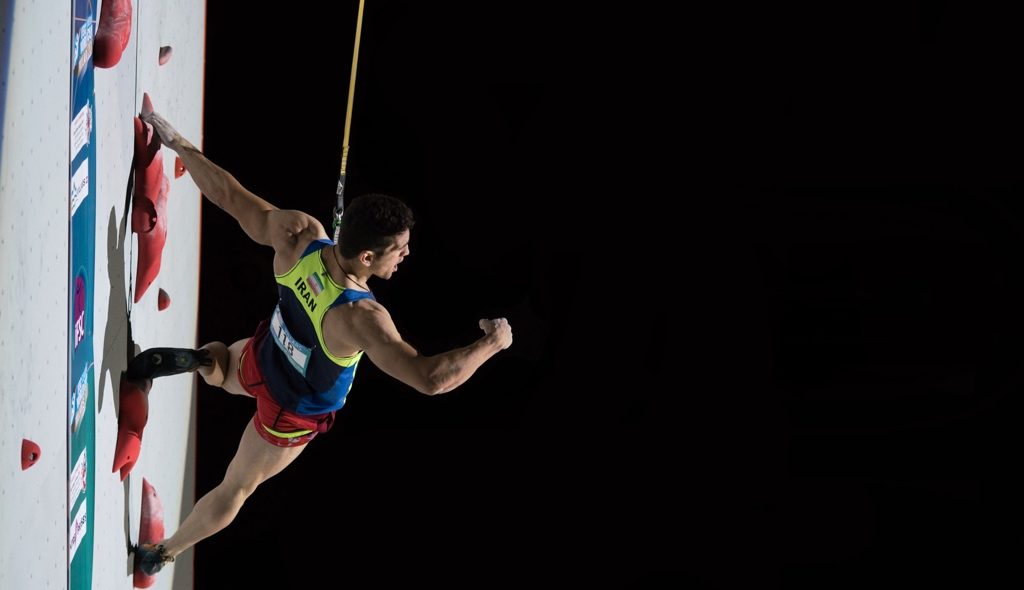 In the film, Barr goes to Russia to meet Reza Alipour, the world record holder from Iran, and watch him compete. “He has this Instagram channel to die for,” Barr says. “He looks like a bodyguard or a pin-up model.” Whereas most elite American climbers are super trim, Alipour poses like a bodybuilder, his shoulders hulking, his torso muscles bulging. We’re not in the Buttermilks anymore, Toto.

Barr even tries speed climbing himself. His thoughts? “It’s so hard. So hard.”

He also goes to France, the birthplace of modern speed climbing, and South Asia—where speed climbing is, apparently, huge. And Barr says he gets it now. “It’s the version [of climbing] that viewers will like the best,” he wagers. Because there’s a theater to it, like figure skating, he says. There’s a buzzer at the top to slap, and even if you’re the best in the world and train your whole life, just a tiny misstep can dash all your athletic dreams.

In the end, Barr concludes that climbing is simply “going up,” so speed climbing is definitely still real climbing, “just a really different version.” And if this is the version of rock climbing that millions of viewers are going to see on TV in 2020, then it’s likely to influence a whole generation of new climbers. And in “Up To Speed,” Reel Rock gives viewers a sneak peek into that fast, furious and fun world.

Sneak Peek of Reel Rock 2016 Featured on Outside Online

Boulder resident looks to compete in climbing at 2020 Olympic Games