Traveling for the Holidays? Avoid Getting Sick with These Health Hacks

Traveling for the Holidays? Avoid Getting Sick with These Health Hacks

Before you board that plane, consider these three simple tips to help keep your festivities sniffle-free and your season bright.

The holidays are almost here, and you may soon be one of the many people boarding a plane, train, or automobile to spend time with loved ones.

However, being in close contact with several people in an enclosed space can also expose you to many germs before you’ve reached your destination, increasing your risk of getting sick.

So, before you book that ticket, consider these tips to help keep your festivities sniffle-free and your season bright.

1. Be on your germ guard

Before setting foot in an airport, train station, or bus station, Jason Tetro, microbiology researcher and author of “The Germ Files” suggests thinking of these public places like an emergency room.

“You are in a crowded environment and you are surrounded by people with varying degrees of health. Because you do not know who might be infected, you have to be ready for the unexpected,” Tetro told Healthline.

He says the majority of microbial species, such as viruses, bacteria, and fungi, come from people.

“For the most part, we are talking about colds and flus, but there are other possible pathogens that could lead to problems for the respiratory tract, the gastrointestinal system, and the skin,” he said.

In fact, a recent study published in the journal PNAS reported that passengers on intercontinental flights who sat within two seats or one row of a person with a respiratory illness have an 80 percent or greater chance of getting sick.

The good news is, the study found that for most of the passengers on the plane, the chance of infection was less than 3 percent.

Still, Tetro says the best way to stay clear of germs, “Is to either avoid them physically — which isn’t really an option in a place like an airport or airplane — or prevent exposure through the use of disinfection for surfaces, antiseptics for the skin, avoidance of risky foods, and barrier protection for the respiratory tract.”

The best ways to guard yourself, he adds, include the following:

She also suggests turning off air vents so that circulated air doesn’t blow directly your way.

Some people recommend travelers try lining the inside of their nostrils with petroleum jelly (such as Vaseline) to trap germs and keep them from being inhaled through the nose. However, Tetro says that this most likely won’t prevent infection.

“No one has really tested this, and to be honest, I doubt it would be very effective. The droplets that spread in a cough or sneeze can be quite small — we’re talking a thousand times smaller than a raindrop. You could imagine how the size of those nostrils unless completely plugged would allow those viruses to sneak in,” he said.

Tetro adds that while use of petroleum jelly in this way occasionally may not be all that troubling, he warns that if you happen to inhale small amounts, they could end up in the lungs and lead to a condition known as lipoid pneumonia.

“This usually happens with long-term use of the product,” he said. 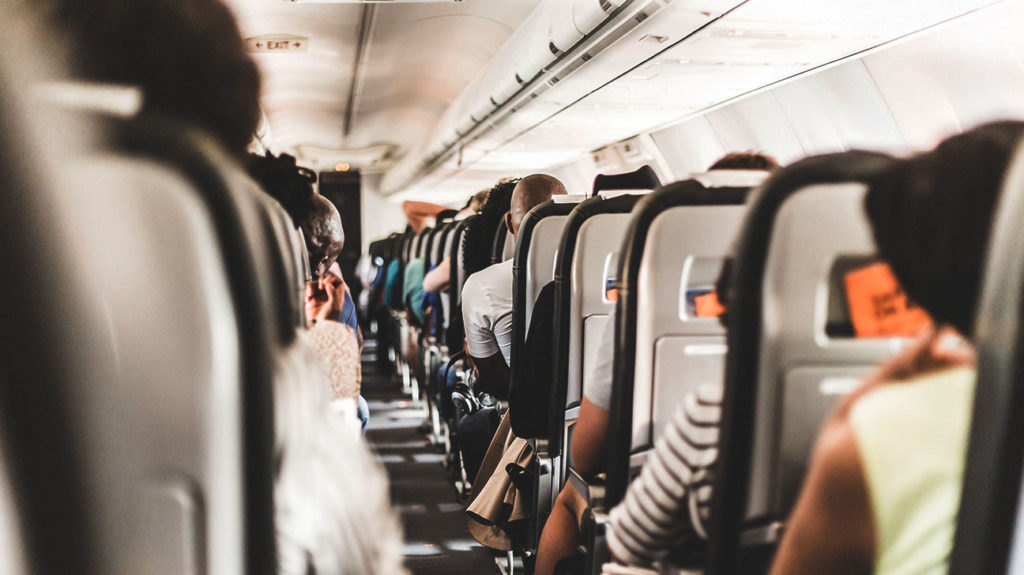 Use disinfectant wipes on surfaces such as tray tables and seat headrests for extra protection. Getty Images

2. Wash your hands and change clothes after your trip

If your hands pick up microbes of the flu, staph, or respiratory virus while traveling and you touch your face, you can become infected, explains Tetro.

Because on average, people touch their faces, noses, mouths, and eyes between five to 16 times per hour, he says the best way to avoid contracting illness-borne germs is to wash your hands with soap and water. (Tetro notes the soap does not have to be antibacterial.)

While washing, take 30 seconds to clean in between your fingers and under your fingernails, areas germs hide because people often miss cleaning.

Additionally, once you reach your destination, changing into new clothes is a good idea. While your clothes can pick up microbes from being in public, how long those microbes stay on your clothes varies.

For some perspective, Tetro points out that when wearing clothes, people shed 37 million microorganisms per hour.

Since you have no way of knowing what types of microbes are on your clothes, Tetro says ditch your travel clothes and put on a fresh outfit.

3. Eat healthy, exercise, and sleep before your trip

Before you set off on your trip, Sexton says start building your immune system now with proper food, exercise, and sleep.

“You can get anxious because you’re in the same environment with a lot of people and don’t know what illness people have or what you’re being exposed to,” she said. “Keep in mind that it depends on the condition of your immune system way before travel. Building a healthy immune system is an ongoing process throughout the winter and flu season.”

She says start by consuming food that is closest to its purest state in order to get the most nutrients and fiber — all which help the immune system stay strong.

“A lot of times we don’t know how our food is being processed or the ingredients that are in the food, and all that determines the nutritional value that you’re truly receiving. If the food you eat is processed or has a lot of additives then you’re not truly getting the nutrients from the item you are eating,” Sexton said.

Before you partake in holiday festivities, start each day with a healthy breakfast consisting of fresh fruits, juice or smoothies, and vegetables.

“It kick-starts your metabolism and gets you ready for the day before it starts to deteriorate with busyness,” said Sexton. “Plus, during holiday season, by the time dinner rolls around you’ll get offered tempting items like dessert and all sorts of other good food, so you at least know you gave your body a healthy start to the day.”

However, no matter how healthy you end up eating throughout the day, she suggests finding the time to fit in exercise as well.

“Exercise not only helps energize your day, but also regenerates your body and fights off illness. With holidays being a social time, it becomes easier to say, ‘I’ll exercise tomorrow,’” said Sexton.

To combat putting it off, she suggests exercising first thing in the morning so the rest of the day’s schedule can’t interfere.

Sexton points out that getting enough sleep is equally critical before a big trip.

“Getting adequate sleep is imperative because it’s when your body recovers and allows it time to rebuild. While it’s challenging, especially during the holidays, do your best to get between six and eight hours of sleep,” Sexton said.